What is an AFFF Fire Extinguisher?

Anyone who’s familiar with fire extinguishers knows that nowadays, it’s pretty rare for them to only dispense water. A variety of powders, chemicals and foams are most often used as they’ve been specifically designed to combat fires of different classes and scales. Imagine a time where your only options for fire control were a bucket of water or sand -- better than nothing in a pinch, but insufficient except for all but the smallest blazes. With new fire suppression systems available, the average person has access to extinguishers with quite a bit more oomph than their predecessors. Among these, AFFF (Aqueous Film Forming Foam) is one of the most common types of fire suppressant discharge. It is designed to fight the two most common types of fires, Class A which is normal combustibles like wood and paper, and Class B fires like those started with gasoline. If you’re looking for fire suppression solutions, it’s pretty likely you will encounter an AFFF fire extinguisher. Here’s everything you need to know about them:

Everything About AFFF Fire Extinguishers

While firefighters have existed for centuries, some of their most valuable tools have only existed for a relatively short time. In the case of fire suppressant foam, firefighters have only had access to it for just over one hundred years. Fire suppressant foam was invented by Russian chemist and engineer Aleksandr Loran in 1902. The intent of it was pretty simple -- to create a safer, more effective fire suppressant than water. Needless to say, after a century of use, it has developed into subcategories like AFFF, which has established itself as a staple among both professional and amateur firefighters. It works pretty simply -- like water, AFFF cools the fire and disperses its accelerants. It also coat the fire in a sealing film which prevents oxygen from reaching the blaze. In addition to that, AFFF has several fire retardant chemicals and solvents in it making it particularly effective against Class B hydrocarbon fuel fires. It’s a well-rounded solution to frequently encountered classes of fires. One particularly interesting aspect of firefighting foam is its ability to expand. Based on a rate of expansion around 20x that of its initial volume, fire suppressant foam is suited for different types and scales of blazes. In the case of AFFF, with an expansion rate of less than 20x its initial volume, it’s considered a low-expansion foam and is best used for fire spread across large areas. AFFF fire extinguishers are designed to be very mobile, allowing the user to cover lots of area if a fire has spread. They are therefore ideal for outdoor burns, where a high-expansion foam would be preferable for indoor and warehouse use.

Firefighting has come a long way since bucket brigades. For over a hundred years, technology has continuously advanced our ability to fight fires of different sizes and compositions. At the forefront of this fight is AFFF, a type of foam that combines the cooling and smother benefits of water with fire retardant chemicals. The most common types of fire most people will encounter are Class A and Class B fires, which AFFF fire extinguishers are well-equipped to face. If you’re looking into fire suppression solutions, it’s important to consider how AFFF will suit your needs. 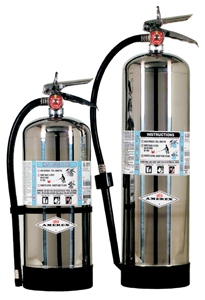